The Paradox of Innocence: An amazing investigation into one of the least known episodes of the Crime Wave years of the Thirties. The names of the violent and dangerous criminals who wrote a bloody chapter in the Depression Years is common but the lives of the people touched and destroyed by their reckless and wanton avarice is forgotten or ignored.

While this work is fact based, it reads like a compelling novel building a complete picture of John Paul Chase and how he became a minor criminal portrayed as a violent and sociopathic monster. This book will make the perfect gift for any history buff but it also fills in well with true crime readers and even hard mystery guys.

This is a serious work with excellent readability.

Based in Marin County, California, THE PARADOX OF INNOCENCE is a true-life novel of two men on the same path, but with strikingly different values. Joe Sergente (antagonist), following Machiavellian principles believed, among other things, that empathy was weakness. John Paul Chase (protagonist), orphaned at age ten, attached himself to Sergente, whom he viewed as a strong father figure. Sergente entangled Chase in a murder.
With no way out, Chase became associated with Baby Face Nelson, John Dillinger, and other gangsters. He was the unknown member of the Dillinger-Nelson gang, useful for his ability to walk into any store and not be recognized. He committed four banks robberies with Baby Face Nelson, two with John Dillinger and one with Pretty Boy Floyd. After Baby Face Nelson’s death, the result of seventeen gunshot wounds, his widow was arrested and tortured by FBI agents until she identified Chase as the unknown member of the gang. At that point, J. Edgar Hoover took a personal interest in John Paul Chase.

For book club discussion, or a deeper reading experience, consider the following:
1) The novel begins at Hutchinson’s Quarry where large chunks of rock are blasted from the hillside, crushed into uniform sizes, sorted, and then slid down chutes to awaiting barges for transport to far off places. Ultimately, the rock is flattened into roadbed for railroads. Does this symbolism have an application in the human experience?
2) Discuss the morality of prostitution in three different settings: Hutchinson’s Quarry, the Chinatown slave dens, and the San Francisco tenderloin.
3) During the 1906 San Francisco earthquake and fire, San Franciscans living on hillsides loaded their possessions into suitcases and tried to outrun the flames – many hung on too long and perished. Picture yourself in their situation, dragging all you had worked for, heirlooms, and treasures, smoke watering your eyes, intense heat, screaming, and no idea as to the extent of the fire, or its outcome. At what point do you let go of your material possessions and flee?
4) Discuss the similarities between the San Francisco garbage wars and the China Town Tong wars a short distance away.
5) Discuss whether, or not, the choices of John Paul’s father led to J.P.’s criminality.
6) It has been said that, “If you shake hands with the devil, you will spend the rest of your life trying to get your hand back.” At what point did John Paul Chase shake hands with the devil?
7) Reflect on the morality of the E.A. Tamm memo and “serving the greater good.”
8) Consider the significance of the subject matter in the sketch Chase gave the Alcatraz chaplain, and whether, or not, the “unfinished” picture was actually finished.
9) Discuss the use, or misuse, of religion on the protagonist (Chase) and the antagonist (Sergente).
10) Are there similarities in your life that relate to Chase’s reflections, from Alcatraz, on the construction of the Golden Gate Bridge?
11) On the launch ride back from Alcatraz, Thomas McDade, a hardened lawyer and FBI agent, deliberated on the taking of a human life. The most troubling was that during war, the soldiers on both ends of the bayonet were basically identical; neither wanted to be there, both had families they loved and that loved them, and most carried pictures of a loved one in their pocket.
Assuming this is correct, and there is an identical you at both ends of the bayonet, could you kill yourself simply because you wore another uniform? Would the question be any easier to answer if you thought and spoke in a foreign language, or had a different religion, or skin color?
12) What inner truths about himself are revealed in Chase’s paintings (namely, his picture to the chaplain, the San Francisco skyline, and the painting for Samuel Rosenblatt)? At times in your life, have these truths ever applied to you? 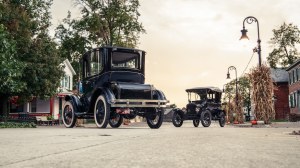 The Detroit Electric was positioned as a luxury car.

The Model 90’s cabin is outfitted like an Edwardian sitting room, complete with plush carpet, drapes, flower vases, and what appears to be a well-stuffed love seat along the back wall. That’s the perch for the driver and her companion (electric cars were invariably marketed to women; Clara Ford, Henry’s wife, was one of Detroit Electric’s most prominent customers). There’s a cushy bucket seat up front which swivels toward the back seat for socializing, and a small padded stool for a fourth occupant. Eight giant windows—with curved glass in the corners, a novelty at the time—let in all the sunlight you can ask for. The two-tone paint finish, black over blue, looks deep enough to dive into.

The Ford, on the other hand, feels stingy. The seats are simple affairs upholstered in a cloth-based imitation leather, and the wooden floor is covered with a rubber mat, a folding top but no side windows. There’s also no driver’s door, because why do you need one? Only rear passengers are allowed the extravagance of getting in and out of the car on whichever side they please. As for the paint, the only choice was black. Read more.

College football was a popular but violent and deadly game.  There were 18 fatalities nationwide that year, including three college players (the rest were high-school athletes).  President Theodore Roosevelt made it clear he wanted reforms.  Many wanted to abolish college football.

Therefore, in December representatives of 62 schools met in New York to change the rules and make the game safer.  The changes included: banning the “flying wedge,” (there was no “set” they just ran in a mass formation at each other often causing serious injury).  A neutral zone between offense and defense was created, and first downs went from 5 yards in three plays to 10 yards in three plays.  [My Great Uncle played for the University of Minnesota in the era of the “flying wedge.”]

The biggest rule change was to make the forward pass legal, but it was nothing like today.  Back then, an incomplete pass resulted in a 15-yard penalty, and a pass that dropped without being touched meant possession went to the defensive team.  These rules were considered “sissy.”

For the first year (1906) teams shunned the “sissy” forward pass.  In 1907, Glenn Scobey (Pop) Warner coached the Carlisle Indian Industrial School, a team he’d built into a football powerhouse in 1899, through trick plays and deception.  He liked the pass.

In 1907, Warner invented the single wing, where a player could run, pass, or dropkick without the defense knowing the play from the formation.  The forward pass was a “trick play” Warner loved.  In 1907, Carlisle outscored their opponents 148–11.

Warner’s “trick”plays included: the end around, reverses, the flea flicker, and a play that required deceptive jerseys.

Warner had elasticized bands sewn into his players’ jerseys so that after taking the kickoff, they would huddle, hide the ball under a jersey, and break in different directions, confusing the kicking team.  –Source Jim Morrison, Smithsonian Magazine

These games were like East-West games and the winner was declared the National Champion.  In 1901, the score was so lopsided 49-0 that Stanford quit after the third quarter and the games were discontinued.  In 1916, the games resumed, and in 1923, the Rose Bowl Stadium was built (modeled after the Yale Bowl in New Haven).

The 1924 Rose Bowl Game:  A small Catholic school from Indiana ventured west to play in their first National Championship game.  They called themselves “the Four Horsemen” and “The Seven Mules.”  You probably already guessed that the backs were the horsemen and the linemen were the mules. 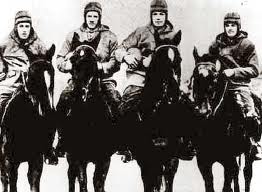 Versus: the Stanford “Indians” with Ernie Nevers coached by Glen “Pop” Warner.

Notre Dame won the game 27 to 10 and became the National Champions.

Professional football began in 1892 when Yale’s All-American “Pudge” Heffelfinger was paid $500 to play a game against the Pittsburgh Athletic Club.  In 1920, the American Professional Football Association (which renamed itself the NFL in 1922) was formed.  A franchise membership cost $100. 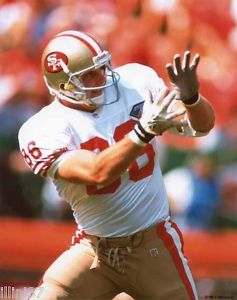 There have been 206 father/son professional football players.  The first father/son to play in Super Bowls were Reg Carolyn and Brett Carolyn who were also the first to both play on Super Bowl Championship teams.   Bob Griese (Miami) and his son Brian (Denver) were the only other father/son to be on winning Super Bowl teams.

1920 – NY Yankee BABE RUTH gifted his “50th Home Run Bat” to be auctioned off for the benefit of Armenian Orphans who had survived the Armenian Genocide of 1915. Receiving the gift at the Polo Grounds in New York was Armenian born Mile Nouvart Dzeron Koshkarian. Ms Nouvart came to America with her family as young child and during her adult life in America became a successful professional painter. Ms Nouvart then abandoned her career and devoted her life spreading awareness and gathering support for the Armenian People, especially Children.

The exuberant Victorian at B and Mission, which for many years was the headquarters of the Marin History Museum, is empty, in need of repair, and vulnerable to fire and vandalism. In May, San Rafael Heritage held a “This Place Matters” demonstration there, waving our orange National Trust signs at responsive passersby.  Last week, we nominated the building to the National Trust for Historic Preservation’s 2016 “America’s 11 Most Endangered Historic Places”.  The buildings won’t be named until October, but we felt that the nomination process itself would help us to crystallize our thinking on how to protect the building and perhaps be a spur to action.  The Gatehouse is already on the National Register of Historic Places.

San Rafael Mansions of the 1920’s are referenced in my true-life novel.

Which teacher influenced you the most?

In 1923, Kelvinator refrigerators had 80 percent of the U.S. market and cost more than a new Ford automobile. The units had a freezing compartment, but it wasn’t until 1929 or 1930 that they added ice trays. So what does this have to do with rubber boots?

Answer: In 1928, an inventor, collecting maple syrup, noticed that ice flaked off his boots. This observation led to the invention and patent of the rubber ice cube tray. The invention of the first flexible stainless steel ice cube tray followed in 1933.

Q: What makes a family a real family? A: Love and trust between the members.

The members don’t have to be perfect or even blood-related.

Every family will be tested. In a real family, when there are problems and hardships, they put aside their differences and help, because they care about each other.

Remember the veterans in your family.

The Greenwood district in Tulsa came to be known as “Black Wall Street”, one of the most commercially successful and affluent majority African-American communities in the United States. Booker T. Washington referred to the Greenwood neighborhood as “Negro Wall Street.”

During the Jim Crow era, African-Americans were not allowed to make purchases or services in predominantly white areas. In particular, Oklahoma was known to have some of the harshest and most unjust Jim Crow laws in the country. Some economists theorize this forced many African-Americans to spend their money where they would feel welcomed, effectively insulating cash flow to within the black community and allowing Greenwood to flourish and prosper.

So the deplorables burned it. In the process, they murdered 300, hospitalized 800, arrested and interned 6,000.